Anything in here will be announced as soon as it changes.
Skip to content

Korean based software developer Voiceye have recently announced a revolutionary new feature for their Voiceye app for the iPhone and Android, Touch Map. Voiceye are renowned for their mobile phone application, also called Voiceye, which enables users to create Accessible Paper for those with print and visual impairments.
This new feature is an update to the Voiceye app, so it is entirely free, as is the Voiceye app! If you already have the Voiceye app, quite simply, once you apply the latest update to your App (which you may have already done) – a new feature will be added to the menu called ‘Touch Map’.
So what is Touch Map?
Essentially, Touch map displays a map on the screen of a smartphone which allows a blind or visually impaired user to navigate around the inside of the building without any need for extra assistance. This is how the map appears below: 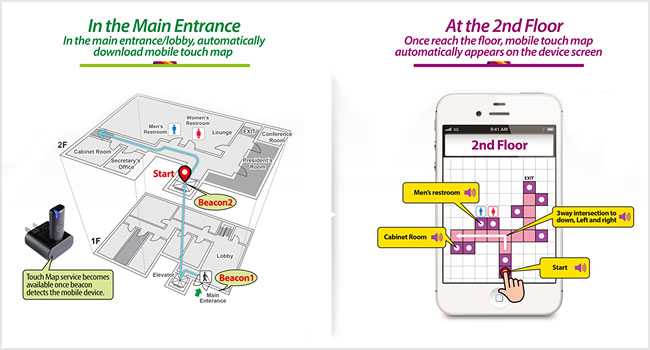 Touch Map will do exactly the same job as a physical tactile map, but all through your smartphone, without the need to learn braille – and because it is free, it is a lot cheaper than a Tactile Map too!
To see exactly how Touch Map work’s for a blind or visually impaired user you can watch this walkthrough video from Voiceye below:

Any cookies that may not be particularly necessary for the website to function and is used specifically to collect user personal data via analytics, ads, other embedded contents are termed as non-necessary cookies. It is mandatory to procure user consent prior to running these cookies on your website.